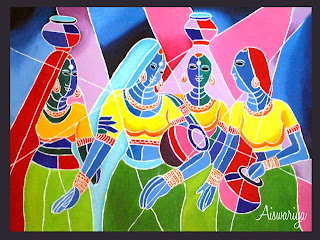 Baffled by the rigidity of every geometrical shape, as my eyes scanned through the points, lines, planes, spheres and slopes around me and subdued by the empowerment of metrics and distances over the heavenly bodies and human bodies in the universe, I could no longer blame the mind-boggling chapters of trigonometry and calculus we had. Although it is comprehendible that a free-falling apple could turn Newton a scientist, it’s beyond my reasoning to ponder what on earth would have stimulated “Geake-Gods” like Euler, Pythagoras and Gauss to formulate those “alien” theorems and axioms. Art in the ancient times was defined by such rigid shapes and ideas until the advent of contemporary art, marking the transformation of artists from conventional inclination towards aesthetic beauty, emphasising on abstract forms, depicting social, political, economic and spiritual scenes, rather than confining their imagination to inflexible objects. Nevertheless, as people became more open to experimentation and intrepid colour combinations, contemporary art reached new horizons, as it not only reflected conceptual and scientific thinking but also simplified things for artists and the common-man. Within no time I could toss the flashy colours over the portrait and sport the finishing touch with the border and scored lines. Now, doesn’t that sound cool?? All said and done, “Rules are meant to be broken, and rigidity, to nurture “out-of-the-box” thinking!!!
Posted by Aiswariya Chidambaram at 4:14 AM

Aiswariya Chidambaram
I strongly believe that "Life by itself is an art", for there is nothing defined in art but its one's perception & interpretation that matters. Afterall,not every artist is completely successful in bringing his/her imagination true on paper. Nevertheless, when right choice of colours blend in right amounts, together with the perfect finishing touch, lo! you have a brilliant masterpiece in front of u. My conviction: "Adventure is not outside a man, it is within." So search deep within yourself to explore & excavate the real "u" and from there on mystery unfolds! Cos a man with imagination is never alone! ( Sorry if it sounds too philosophical, it is unintentional tho!;))